First of all, we have to distinguish between monochrome LED stripes, which are either warm white, cool white, blue, yellow, green, red or amber, and RGB or RGBW LED strips. RGB LED strips to shine in the 3 basic colors red, green, and blue. With it all between colors like violet, orange or even a cold white can be mixed together. RGBW LED stripes are a mixture of RGB LEDs and warm white LEDs. Since many customers find a warm white light (color temperature 2700K – 3000K) pleasant, the mixed cold white of RGB LED stripes was not so popular. This comes from the time when there were normal tungsten wire light bulbs, which shone in exactly the pleasant warm white color. Therefore, RGB WW LED stripes were introduced. 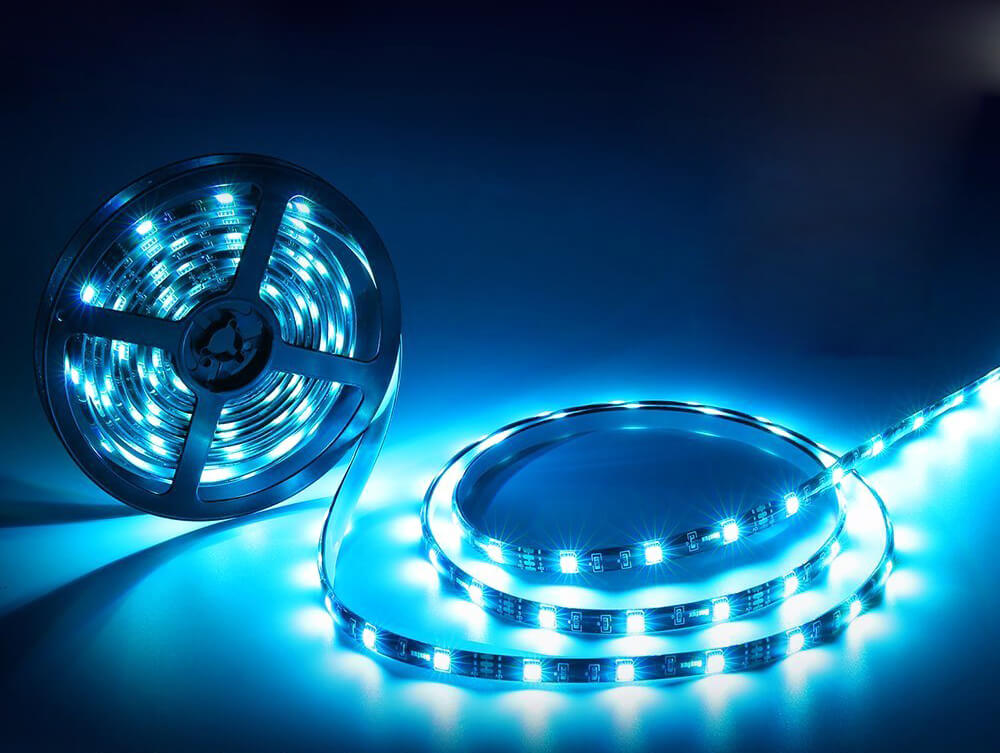 The next step is to determine what voltage your LED strip needs to shine beautifully. Many RGB LED stripes and monochrome LED stripes are designed for 12V. These are usually more cost-effective versions of LED stripes. A frequently observed problem, which occurs with RGB LED Strip lengths (30 LED/m) starting from 4-5m, is a decreasing brightness of the LEDs from the power supply and thus a non-uniform lighting result. This phenomenon does not occur with 24V or 230V LED stripes.

I=Current P=Power consumption/multiplied by the length of the LED strip U=Voltage
We calculate a simple example for clarification. Let’s take a 12V RGB LED strip (30LED/m) in the length of 5m of LED universe and see if a 44 button remote control is compatible. On the pictures, you can see for example, that 12V is printed on the LED strip and RGB is printed on it. The controller of the remote control has also 12V printed on it and 2A per color channel can withstand the electronic components. The LED strip has a power consumption of 7.2W per meter according to the manufacturer. At 5 meters this is 36W. If we now divide 36W/12V we get 3A. The current of 3A is now divided equally between the 3 color channels (R,G,B), so that 1A current per color channel flows through the controller under full load. So we could even use the controller for a RGB LED band (30LED/m) with a length of max. 10 meters.

RGB LED Strip LED Remote Control
In summary, therefore, proceed as follows:
Specify the type of LED strip – monochrome, RGB or RGBW (also RGB WW)
Voltage of the LED band is 12V, 24V or 230V
Power consumption in W/m
Selection of the right remote control based on the above criteria
When do I use a LED remote control and when an IR remote control?
The question, if it is better to use a wireless remote control or infrared remote control for the LED strip is quickly answered.

As long as the receiver can be placed in direct line of sight, color control or dimming by infrared remote control is possible. The range is however limited to a few meters. The IR remote control works on the same principle as a remote control of a television. The advantage of such a simple remote control is that it is cheaper than a radio remote control and can be operated easily by pressing a button. Since the maximum current consumption per channel is not too high, e.g. 2A, the LED strips to be connected must not become too long, or have too many LEDs for longer strips. If you still want to use an IR remote control for very long LED strips, e.g. 20m, you have to take the detour over the additional installation of amplifiers.